Mo Grimeh, Head of Point72’s Global Macro Business, joined us for an interview to talk about how he got to Point72, his experience so far, and his vision for the Macro business.

Tell us about your background. 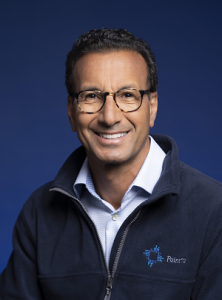 I was born in Casablanca, Morocco and I grew up there. After high school, I left for France to study engineering. I started my career as a quant in commodity derivatives at Société Générale (SocGen) in Paris, and then moved to London.

In London, I traded commodities at Westpac, an Australian bank. After a few years, the entire team moved to New York to trade emerging markets. Commodities and emerging markets are very similar asset classes, so that’s how I moved to the U.S. and changed my focus.

I’ve had an interesting career. I joined SocGen in commodities in the summer of 1990. On August 1, the oil options trader who I was supporting asked me to watch his book as he headed for the French Riviera for the month of August. On August 2, Iraq invaded Kuwait and oil prices doubled, and volatility exploded. Later, I moved to ING to trade emerging markets in December 1994 and that month Mexico devalued the peso and the Tequila crisis spread across Latin America. I joined the emerging markets desk at Lehman Brothers in July 1998, and within a month, Russia defaulted on its debt.  I was at Lehman for 10 years.

What was your focus at Lehman?

I helped grow the presence of the bank in the U.S., including helping with the acquisition of Lehman Brazil and incorporating it into Standard Chartered. I stayed there until 2016, when some of my former Lehman colleagues who had joined Millennium asked me to help them run the fixed income business there.

Was that a culture shock to switch to the buy-side?

It was a breath of fresh air, because after ’08, sell-side trading floors became a lot more risk-focused. Even investment banks became commercial banks, and the culture of having access, conversations, quick decision-making was gone. It was refreshing to come to a hedge fund because it’s flatter and entrepreneurial. A lot of smart people had already moved from banks to the buy-side, so it was good to join them again.

How did you end up joining Point72?

After I left Millennium, I said, okay, I really like the multi-strategy space, so I went through the list of places that fit that category. The list was short, and the one that I really liked was Point72. So I reached out, and everyone I spoke with during the process was fantastic, such a really a great group of people. I also met and spoke to some of the portfolio managers (PMs) and was really impressed and I guess I impressed them enough as well. It was important for me to have the buy-in from the team. I’m glad I did, because some of those were the only face-to-face meetings I had before Covid closed our offices.

Tell us about the PMs that you’ve hired so far and what you’re looking for in other candidates.

We’re a global business, and we go where the talent is. We have teams in New York, Connecticut, London, Florida, Sydney, Hong Kong, Singapore, and we’re looking to add teams in Paris and elsewhere across the world. We had a great team in place when I joined, and we’ve been busy building on that foundation. The Firm has an amazing culture that strikes a good balance between collaboration and innovation, between individualism and collaboration of thoughts. As the Firm continues to grow, I expect Macro’s contribution will grow with it.

What do you think differentiates Point72 as a home for Macro talent?

I think we have a great story. We are a top brand with nearly 30 years of history, and we’ve had a macro business for a very long time. In fact, we have PMs in Macro who have been successful at the Firm since the early 2000s. The only new thing happening now is that the Firm wants to grow the group. Macro can be a material contributor and will grow with the Firm.

I think we have three key differentiators. One is Steve Cohen, our founder. He has been extremely supportive and generous with his time. He interviews Macro candidates and his style resonates well with them. He is engaging and because he trades the market every day, candidates can relate to him. They don’t get this at other firms where the principal might not have his pulse on the market.

Second is collaboration and culture. The Firm encourages collaboration but does not mandate it. This appeals to candidates who don’t want to be in silos and want to benefit from synergies with the broader team, with the Long/Short PMs, and other parts of the Firm. Harry Schwefel, co-CIO of the Long/Short business and Denis Dancanet, Head of Cubist, have both interviewed candidates for Macro. I also have three PMs interview each incoming candidate. I want everyone on the team to be on board with whoever is joining us because the team matters more than the individual. I also want the Macro team to feel unified, so I have our PMs in Sydney and Asia interview New York and London candidates and vice versa.

The third differentiator is our commitment to PMs. We respect our commitment and our risk limits. As long as the PMs keep to their mandate and do what they told us they will do, we respect their books, which is different than at other firms. We believe that by sticking to our commitments, we can unleash the true potential of the PMs to do their job.

What do you get up to outside of work?

Just like my mantra in risk management: No illiquidity, no complexity, and no negative convexity. I try to keep it simple at home, too. As for hobbies, I have five very active boys and frankly, my hobby for now is being a full-time driver every weekend to their various sporting activities.